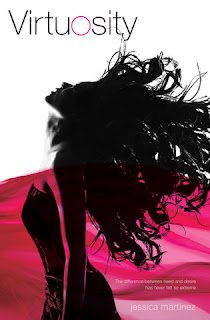 Summary:
Now is not the time for Carmen to fall in love. And Jeremy is hands-down the wrong guy for her to fall for. He is infuriating, arrogant, and the only person who can stand in the way of Carmen getting the one thing she wants most: to win the prestigious Guarneri competition. Carmen's whole life is violin, and until she met Jeremy, her whole focus was winning. But what if Jeremy isn't just hot...what if Jeremy is better?

Carmen knows that kissing Jeremy can't end well, but she just can't stay away. Nobody else understands her--and riles her up--like he does. Still, she can't trust him with her biggest secret: She is so desperate to win she takes anti-anxiety drugs to perform, and what started as an easy fix has become a hungry addiction. Carmen is sick of not feeling anything on stage and even more sick of always doing what she’s told, doing what's expected.

Sometimes, being on top just means you have a long way to fall... (from GoodReads)

Review:
I thought that Virtuosity was a great novel about a very interesting topic. Most YA novels have protagonists who are extremely ordinary as to appeal to a wider audience; but Carmen has a special talent. She is amazing at the violin, so good, in fact, that's she has won a Grammy and even has her record deal for her music. I liked reading about a character who was so gifted because it was just so different.

I was also really interested in Virtuosity because I love music and I played clarinet for 8 years. I was hoping that I would be understand Carmen's background and issues better. Carmen was so well-written that I didn't need the musical background to know her. On the outside, it seems as though Carmen has it all, but there's other things going on that not many people know about. For one, Carmen's mom is crazy and puts a ton of pressure on her, in addition to the pressure that Carmen puts on herself. If that wasn't enough, Carment also has neviousness problems and has to take anti-anxiety medicine to relieve them. Her dependence on the drug gets so bad that she even has to take them to practice the violin.

This is where Jeremy steps in. Even though in the beginning he was a bit of a jerk, I still liked him. I guess I more liked the witty banter between the two. I definitely liked the romance aspect since I'm a big fan of that, but I think the book could have been written without it too. There's definitely enough going on that you would still have a pretty good story and could focus even more on Carmen's music and the problems that come along with it.

Overall, I enjoyed Virtuosity. There's even a bit of a twist at the end, and I liked the way that Carmen reacted to that. I thought it was very mature. For fans of (classical) music, I would whole-heartedly recommend Virtuosity, though I think anyone will enjoy it.