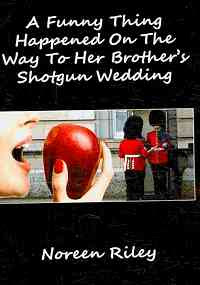 Summary:
A Funny Thing Happened On The Way To Her Brother's Shotgun Wedding is the story of Evelyn Dunleavy, her close knit circle of family and city-dwelling friends, and the chaos that ensues when her oldest sibling, Michael, announces that he is getting married. In London, where he now lives, to the girlfriend no one really knows. And by the way...she's pregnant.

The rest of the story follows Evie over to London for a few months as the official family delegate charged with getting to know her soon to be sister-in-law. It certainly doesn't hurt that because of his cramped living quarters her brother has lined up a room for her in the apartment of one of his groomsmen, Nate, that Evie feels an instant attraction to...despite his love of the music group ABBA, or the fact that he chooses curries over pizza. It doesn't help that Michael still considers his sister to be off-limits from the advances of his friends.

She comes to the quick conclusion that wedding planning can be stressful no matter which side of the Pond you hail from, and it's always more fun to have your best friends around you for a bachelorette party, especially when the bride-to-be is seven months pregnant. (from GoodReads)

Review:
I thought A Funny Thing was such a cute novel! I really enjoyed reading and laughing about Evie and her crazy friends and family.

I haven't read that many chick lit adult novels, but A Funny Thing was definitely one of the better ones. I liked the storyline a lot, especially because I love London, so it was nice to spend some time there through Evie.

All the characters were hilarious, including Evie and her family. Evie's mom was the best because she kept trying to use British slang even though she's American and it just sounded so funny. I could definitely see someone trying to do that and failing. But everyone else from Evie's siblings and even niece and nephew were great with their witty comments.

The main focus of the book is Evie's burgeoning romance with roommate Nate. First off, I love that name. And Nate was so sweet and it was cute how they both liked each other but wouldn't say anything to each other. I really enjoyed reading about their interactions and seeing them get to know each other better.

So, if you're looking for a fun and light novel, look no further than A Funny Thing Happened on the Way to Her Brother's Shotgun Wedding (whew, the title is a mouthful).