Book vs. Movie: The Hunger Games 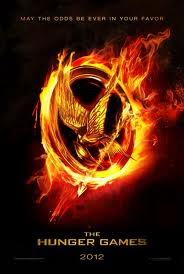 So last night I went to see The Hunger Games! It was AMAZING!!! I was trying not to get too excited because I didn't want to be disappointed. I thought it really captured the spirit of the book as well as staying really true to the plot. Not that much was changed which was awesome. I have some bullet points I'd like to address, and there might be spoilers.

- I thought all the actors were perfectly cast and did a fantastic job. That obviously includes Jennifer Lawrence, Josh Hutcherson, Liam Hemsworth as well as the rest of the cast. I was especially blown away by Stanley Tucci as Caesar Flickerman. He had a much bigger part in the movie but I was okay with that because he did such a good job. Woody Harrelson as Haymitch was spot-on as well.

- The set was just how I imagined it. Distict 12, the Capitol and the arena were beautifully designed and really similar to how they were described in the book.

- The entire plot and dialogue were pretty much the same, for which I was glad. There were small differences and obviously things were cut, but the important points were all hit.

- The book is Katniss narrating in first person. But since the movie wasn't just from her perspective, we got some extra scenes with the Gamemakers and President Snow. I really liked these additions because I think they explained things that might have gotten lost in the book to movie adaptation.

- I've always really liked Peeta but now I am in love with him. Josh Hutcherson did a wonderful job and I'm really glad he was cast.

- For some things I didn't like, I was surprised that almost half the movie was the training that goes on before The Hunger Games. I think some of that time should have been added to the arena portion, which could have been longer. I thought that Katniss's relationships with Rue and Peeta could have been developed more. I know a lot of it is them sitting in a cave talking, so I understand why that was cut.

- People have been mentioning they didn't like the shaky cam, but it actually wasn't a problem for me. I didn't even notice it but I also don't get motion sickness which could be part of it.

- I like Lenny Kravitz, but I wasn't really a fan of his portrayal of Cinna. I felt like he should have been more emotional than he was. He didn't do horrible and hopefully he'll step it up in the next movie.

Overall, I loved The Hunger Games and I was very impressed with the movie. It really stays true to the book and now I wish I could watch Catching Fire on-screen so I can see the rest of the series come to life. I would definitely recommend seeing this soon!!
Posted by Simply_Megan at 6:51 PM

We've heard lots about the shaky cam too. We're not big fans of that technique, but if it fits, then we understand.

Cinna was one of our favorite characters, so it's too bad you didn't think he was stronger... BUT, you're helping us to lower our expectations, so maybe that will help us to not be disappointed!