Where It Began by Ann Redisch Stampler 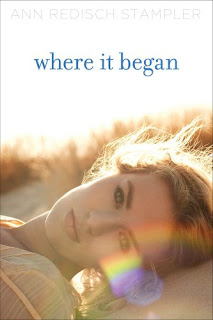 Summary:
Sometimes the end is just the beginning.

Gabby lived under the radar until her makeover. Way under. But when she started her senior year as a blonder, better-dressed version of herself, she struck gold: Billy Nash believed she was a the flawless girl she was pretending to be. The next eight months with Billy were bliss...Until the night Gabby woke up on the ground next to the remains of his BMW without a single memory of how she got there.

And Billy's nowhere to be found.

All Gabby wants is to make everything perfect again. But getting her life back isn't difficult, it's impossible. Because nothing is the same, and Gabby's beginning to realize she's missed more than a few danger signs along the way.

It's time for Gabby to face the truth, even if it means everything changes.

Especially if it means everything changes. (from GoodReads)

Review:
Where It Began was an okay book. I would have liked it a lot better except there were some elements of the plot and characterization that I could not get over. I didn't hate it, but with a few improvements Where It Began could have been a much better book.

The premise was really interesting because it highlighted how you could manipulate the legal system, especially if you have a lot of money and you're still a minor. Billy is the best example of this, because his family is loaded and they are able to keep him out of juvie by hiring the best lawyers and some well-placed bribes. Everyone knows the rich and famous are treated differently when they commit crimes, but here it is in contemporary YA.

Gabby gets a taste of this when she crashes her boyfriend Billy's car while driving drunk. So there's several offenses here, but Billy and his family of privelege are here to help her, as long as she acts a certain way and says all the right things. Luckily for everyone involved, Gabby can't remember a single thing about the accident due to a head injury.

There is a twist surrounding the circumstances of the crash, and I figured it out in the first chapter. I think Where It Began would be much more interesting if I didn't know how it was going to end. Regardless, I felt like the plot was bogged down by unnecessary narration and Gabby's thoughts. The writing wasn't as seamless as I would have liked and I found myself skipping pages just to get away from random details.

Most of the characters in Where It Began are very shallow, Gabby included. I didn't really care for any of them and Gabby was super annoying throughout most of the story. Even though Billy does not treat her that great, she sees him as the best boyfriend ever and has really low self-esteem. It was frustrating to see Gabby go along with everything Billy said and not stand up for herself. Even when she finds out the truth, she still doesn't stand up for herself. Luckily one of her friends does it but it irked me that Gabby still refused to take control of her whole life.

I thought Where It Began was interesting in regards to the legal situation and how it can be manipulated with money. But the rest of the book was hindered by shallow characters and little action and plot movement. However, I understand that this is the author's first novel and I think if she fixes the problems in Where It Began, her next book will be much better.