Waiting on Wednesday was started by Jill at Breaking the Spine for bloggers and readers to learn about new books. 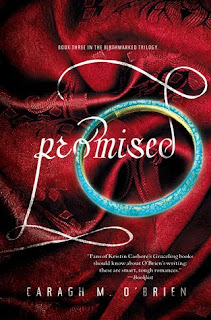 After defying the ruthless Enclave, surviving the wasteland, and upending the rigid matriarchy of Sylum, Gaia Stone now faces her biggest challenge ever. She must lead the people of Sylum back to the Enclave and persuade the Protectorat to grant them refuge from the wasteland. In Gaia’s absence, the Enclave has grown more cruel, more desperate to experiment on mothers from outside the wall, and now the stakes of cooperating or rebelling have never been higher. Is Gaia ready, as a leader, to sacrifice what—or whom—she loves most? (from GoodReads)

I've already read and enjoyed the first two books in this trilogy, Birthmarked and Prized, so now it's time for a third! Promised will be released October 2, 2012
Posted by Simply_Megan at 2:09 PM

heard amazing thing about this series but i still gotta read the first book. luckily i have it in my tbr pile. great pick :)

check out my WoW.

I loved Birthmarked, but haven't gotten to read Prized yet. I've heard great things though. I guess I better get reading! Great pick!

Check out my WoW!