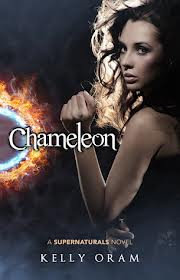 Summary:
For small-town rebel Dani Webber magic and monsters are no more real than the Easter Bunny… until the day she accidentally stops time. Dani quickly discovers that not only do supernaturals exist, but she herself is one of them. This is great news for her life-long best friend Russ, who can finally come clean about his own supernatural status and his undying love for her. Before the two can start to enjoy the long overdue relationship, Dani is taken by a powerful council of supernaturals who believe she is the Chosen One destined to save them from extinction.

As if being kidnapped and expected to save the world isn’t bad enough, an ancient prophecy warns of the Chosen One’s dark nature: “Only the truest love will keep her an agent for good.” The council believes they know who this “true love” is and, unfortunately, that person isn’t Russ. The mysterious, powerful and devastatingly handsome Seer is the last person Dani wants in her life, but when she starts having visions of a horrific future, she has no one else to turn to for help.

Soon Dani finds herself torn between two very different boys with two very different opinions of whom she can trust. With the visions getting worse and time running out, Dani is forced to put aside her feelings and work with both the Seer and Russ before an ancient evil is unleashed upon the earth. (from GoodReads)

Review:
I'm a huge fan of Kelly Oram and I've previously read her two contemporary novels: Serial Hottie and V is For Virgin. So Chameleon is the first fantasy novel I've read by this author. While I enjoyed Chameleon, I think I like her contemporary books better.

There were both things I liked and disliked in Chameleon. First, I thought Dani was a kick-ass heroine. She's super powerful (but doesn't know it until her abilities manifest) and thrown into the supernatural world so she has no idea what's going on. Even so, she remains a strong and tough protagonist. She's intent on doing the right thing and is able to navigate this new environment while trying to figure out who to trust.

The supernatural world of Chameleon was very interesting and features the creatures we're used to seeing in other YA books, such as fairies, vampires and warlocks. However, Dani is the most powerful creature there is because she can change forms when she touches a different being - a so-called "chameleon." I liked that spin and the fact that there are "Seers" who get visions of the future. The mystery of who is killing the supernatural beings was interesting and I was caught off guard by who the villain ended up being. I was not expecting that twist at all!

The only thing I disliked in Chameleon was the love triangle between Dani, Russ and Gabriel. Russ is Dani's childhood friend who also happens to be a warlock and Gabriel is a Seer that Dani is "married" to by the Council in order to forge a powerful supernatural bond. Naturally this doesn't sit well with Russ, who believes that Dani belongs to him. I thought the triangle was a distraction from the actual story and made the novel unnecessarily long. It didn't help that I didn't like the two love interests: Russ acted like a jerk and Gabriel was too formal and proper. I would have much rather read about the new supernatural creatures we're introduced to and spent more time on the actual plot.

Overall, I enjoyed Kelly Oram's spin on the popular fantasy genre. She always writes great female leads who are strong and kick butt throughout the story! I can't wait to read more of her work.

The rest of the blog tour.