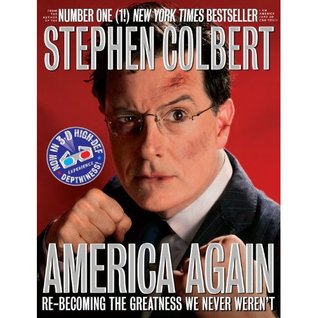 Summary:
Book store nation, in the history of mankind there has never been a greater country than America. You could say we're the #1 nation at being the best at greatness.

But as perfect as America is in every single way, America is broken! And we can't exchange it because we're 236 years past the 30-day return window. Look around--we don't make anything anymore, we've mortgaged our future to China, and the Apologist-in-Chief goes on world tours just to bow before foreign leaders. Worse, the L.A. Four Seasons Hotel doesn't even have a dedicated phone button for the Spa. You have to dial an extension! Where did we lose our way?!

It's high time we restored America to the greatness it never lost!

Luckily, AMERICA AGAIN will singlebookedly pull this country back from the brink. It features everything from chapters, to page numbers, to fonts. Covering subject's ranging from healthcare ("I shudder to think where we'd be without the wide variety of prescription drugs to treat our maladies, such as think-shuddering") to the economy ("Life is giving us lemons, and we're shipping them to the Chinese to make our lemon-flavored leadonade") to food ("Feel free to deep fry this book-it's a rich source of fiber"), Stephen gives America the dose of truth it needs to get back on track. (from GoodReads)

Review:
I'm in love with Stephen Colbert. I watch his show all the time and even got to see a live taping of The Colbert Report last summer. I think he's hilarious and so smart. Obviously I had to read his latest book! America Again was like his show in book form; he still uses satire and irony to make his point. Any fans of Colbert will love this book!

There isn't a whole lot to say since there aren't any characters or plot in this book. It's mostly Stephen speaking as his character about different topics, such as health care, the economy and taxes. The book provides 3D glasses for the pictures in the beginning of each chapter. There are fun footnotes and little extras by "other people" (aka Stephen Colbert pretending to be someone else).

I enjoyed this book a lot and it gave me a lot to think about! If you like his show, I would definitely recommend America Again! Or you might like it if you're interested in humor and politics!

We too love Colbert, and even just the blurb you included here had us laughing. Good to know the book's a great read!