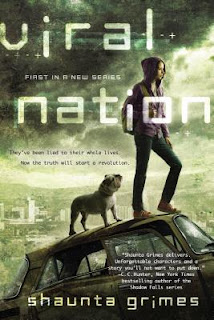 Summary:
After a virus claimed nearly the entire global population, the world changed. The United States splintered into fifty walled cities where the surviving citizens clustered to start over. The Company, which ended the plague by bringing a life-saving vaccine back from the future, controls everything. They ration the scant food and supplies through a lottery system, mandate daily doses of virus suppressant, and even monitor future timelines to stop crimes before they can be committed.

Brilliant but autistic, sixteen-year-old Clover Donovan has always dreamed of studying at the Waverly-Stead Academy. Her brother and caretaker, West, has done everything in his power to make her dream a reality. But Clover’s refusal to part with her beloved service dog denies her entry into the school. Instead, she is drafted into the Time Mariners, a team of Company operatives who travel through time to gather news about the future.

When one of Clover’s missions reveals that West’s life is in danger, the Donovans are shattered. To change West’s fate, they’ll have to take on the mysterious Company. But as its secrets are revealed, they realize that the Company’s rule may not be as benevolent as it seems. In saving her brother, Clover will face a more powerful force than she ever imagined… and will team up with a band of fellow misfits and outsiders to incite a revolution that will change their destinies forever. (from GoodReads)

Review:
There was a lot going on in Viral Nation and the author took a huge risk of writing about the challenging topic of time travel. While this novel shares many of the characteristics of other dystopian/post-apocalyptic books, the protagonist and science fiction aspect allow it to stand on its own.

I thought the most interesting part of Viral Nation was the main character Clover, specifically because she has Autism, albeit a high-functioning version (probably Asperger's). She has an awesome therapy dog to help with the anxiety but I thought it was wonderful that the author chose to write a character that was so different from any I had ever read before. Autism isn't well-represented in YA, so it was nice to see it here and play such a big role.

Clover is a pretty awesome character. She's super smart and along with the help of her brother and some new friends, she's trying to take down the Company, which is the evil entity that has control over Clover's city. It wasn't clear what exactly the Company has done, except make everyone believe they have to take the vaccine every day and just wield power over the citizens like in every other dystopian society. Hopefully we'll learn more about how malevolent the Company actually is in the sequel.

Time travel actually plays a big role in the novel, and I tried not to think too hard about it. I'm not a huge fan of this topic because it's usually confusing and not thought out well enough. I thought Shaunta Grimes did a good job writing about time travel for the most part. The characters kept talking about how they were in different time loops which was definitely confusing because one character knew things but didn't know them at the same time. That's why I stay away from time travel!

I'm looking forward to the sequel of Viral Nation and I hope everything (the setting, plot, characters) continues to develop further.