Plague in the Mirror by Deborah Noyes 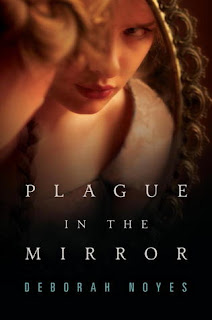 Summary:
In a sensual paranormal romance, a teen girl’s doppelgänger from 1348 Florence lures her into the past in hopes of exacting a deadly trade.

It was meant to be a diversion — a summer in Florence with her best friend, Liam, and his travel-writer mom, doing historical research between breaks for gelato. A chance to forget that back in Vermont, May’s parents, and all semblance of safety, were breaking up. But when May wakes one night sensing someone in her room, only to find her ghostly twin staring back at her, normalcy becomes a distant memory. And when later she follows the menacing Cristofana through a portale to fourteenth-century Florence, May never expects to find safety in the eyes of Marco, a soulful painter who awakens in her a burning desire and makes her feel truly seen. The wily Cristofana wants nothing less of May than to inhabit each other’s lives, but with the Black Death ravaging Old Florence, can May’s longing for Marco’s touch be anything but madness? Lush with atmosphere both passionate and eerie, this evocative tale follows a girl on the brink of womanhood as she dares to transcend the familiar — and discovers her sensual power. (from GoodReads)

Review:
I was extremely intrigued by the synopsis of Plague in the Mirror, especially the idea of doppelgangers. For anyone who has watched The Vampire Diaries, you know that if it's done right, doppelgangers can make for an amazing story. Unfortunately for the readers, the concept was not executed correctly, making the book a little overwhelming.

There was so much going on in Plague in the Mirror and it seemed as though the author had a lot of ideas and tried to cram them all into one novel. First, there's May touring Italy with Liam and his mom, helping her write her latest travel book. That could be a story right there. Then we have Cristofana, the malicious doppelganger that wants to switch places with May. Ok, different story. And yet, we have time traveling to the past and romance with a 14th century artist. May's parents are also getting divorced, so that's another subplot. Seriously, there were so many subplots that the author has enough material for about 4 books. A really skilled writer might have been able to weave all these ideas together cohesively, but that didn't happen in Plague in the Mirror.

What I liked about the novel: Florence! The author did a great job of describing the city, both the present day and past versions. I want to visit Italy so badly, and this story just awoke the travel bug in me. I was very jealous of May getting to eat gelato in the warm summer nights in such a beautiful place. I also liked Liam and the little romance between him and May. That was pretty much the only part I cared about reading.

I wasn't really a fan of the time-traveling aspect, because I thought it was unrealistic. Mainly I'm talking about the fact that May kept wanting to travel to the 14th century, right in the middle of the bubonic plague. I love history, but that is not a time I would want to live in. May is drawn to the 1300s because she sees Marco and falls instantly in love with him. I couldn't stand to read about their interactions, especially because they didn't even speak the same language! I get that he's attractive, but it's so annoying to see a character risk her life for a guy she doesn't know and can never know because they can't talk to each other. That part was so irksome!

By the end, I started skimming because I honestly didn't care what happened. I only kept reading because I wanted to see how things between May and Liam ended up. Out of all the cool elements of Plague in the Mirror, that was the only truly compelling part (based on the execution). I'm only recommending this to people who might want to read about all these different subplots, but don't have too high of expectations.