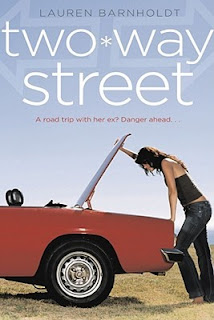 Summary:
There are two sides to every breakup.

This is Jordan and Courtney, totally in love. Sure, they were an unlikely high school couple. But they clicked; it worked. They're even going to the same college, and driving cross-country together for orientation.

Then Jordan dumps Courtney -- for a girl he met on the Internet.

It's too late to change plans, so the road trip is on. Courtney's heartbroken, but figures she can tough it out for a few days. La la la -- this is Courtney pretending not to care.

But in a strange twist, Jordan cares. A lot.


Turns out, he's got a secret or two that he's not telling Courtney. And it has everything to do with why they broke up, why they can't get back together, and how, in spite of it all, this couple is destined for each other. (From GoodReads)

Review:
I kind of stumbled upon this book by accident. I am a member of PulseIt and decided to look at what free books they were offering. I really enjoyed Lauren Barnholdt's Sometimes It Happens so I decided to read Two Way Street. I'm so glad I did because I seriously read it in one sitting, it was that good!

Two Way Street switches POV a lot: between Jordan and Courtney and then past and present between the both of them. I actually really liked that because we got to see what was going on during the road trip and what happened in the past when they were in a relationship. The story comes together very nicely and isn't jumpy at all.

I also thought that Two Way Street was hilarious, especially Jordan's thoughts and commentary on certain things. I think I laughed out loud a few times. Lauren Barnholdt really captured the teenage voice in this book.

The secret that Jordan is keeping is very interesting and you kind of figure it out pretty early on. I don't know how likely it would happen in real life but it still made for a good story!

The only negative I can say about Two Way Street is that it really dates itself by talking about MySpace a lot. I didn't realize that this book was published in 2007, when MySpace was really big. The old social networking site is discussed a lot because the characters are posting comments and whatnot on each other's pages. If MySpace had been replaced by Facebook this would have been totally modern (barring the talk of Instant Messenger and mp3s). I couldn't help but cringe every time MySpace was mentioned because it's so obsolete now.

Other than that, I really enjoyed Two Way Street and thought it was a fantastic contemporary novel. I can't wait to read more by Lauren Barnholdt!