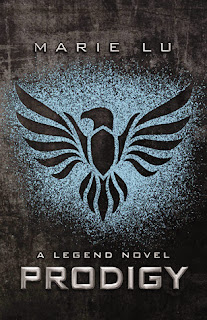 Summary:
June and Day arrive in Vegas just as the unthinkable happens: the Elector Primo dies, and his son Anden takes his place. With the Republic edging closer to chaos, the two join a group of Patriot rebels eager to help Day rescue his brother and offer passage to the Colonies. They have only one request—June and Day must assassinate the new Elector.

It’s their chance to change the nation, to give voice to a people silenced for too long.

But as June realizes this Elector is nothing like his father, she’s haunted by the choice ahead. What if Anden is a new beginning? What if revolution must be more than loss and vengeance, anger and blood—what if the Patriots are wrong?

In this highly-anticipated sequel, Lu delivers a breathtaking thriller with high stakes and cinematic action. (from GoodReads)

Review:
I think I like Prodigy better than Legend which is such a surprise because the second book of a trilogy usually falls prey to the Middle Book Syndrome. Regardless, I'm very happy because I got an exciting story out of my good fortune (and Marie Lu's fantastic writing).

I read Legend over a year and half ago, so in the beginning I had trouble remembering exactly what  happened. But as I kept reading, the details came back to me so I was still able to enjoy the story. What I love about this trilogy is how action-packed and intense it is. June is a trained fighter and a genius, so she is a master at analyzing a situation and figuring out what to do. Day is super graceful and strong, so he can easily run around, cause diversions and escape captors. Together they are practically unstoppable and that's why I loved reading about them. Even though they are both young, they definitely have the ability to start a revolution and change the way their country operates.

The romance (particularly between June and Day) is an important part of the book and I enjoyed reading about it. My one complain about Legend was that the romance between our two narrators was too rushed so I was glad to see it develop more in Prodigy. The author couldn't resist with adding in secondary love interests and I would have preferred if the drama could have just been between Day and June sans jealousy and love triangles (or rather, squares). Day's longtime ally and friend Tess has a crush on him and it's obvious that the new Elector is infatuated with June. I didn't get the Tess love triangle because isn't she like thirteen? That's a little young even if Day is only two or three years older. I didn't mind Anden as much even though he is also five years older than June. A tad unrealistic, especially since June is 15. As you can see I'm really rooting for June and Day to be together!

There were plenty of twists and turns in the plot and the characters go places I didn't imagine (the Colonies, anyone?). The parallels with the Colonies was a nice touch and how it's not so much different from the Republic after all. The ending of the book was totally unfair, but in a really good way.

Overall, I'm really looking forward to Champion and I only have to wait until November to read it! It really is my lucky day.

Oh I hated Tess so much in this book! The romance was one of my favorite things in Legend and I hated it being messed up in this book. It better end right in Champion!