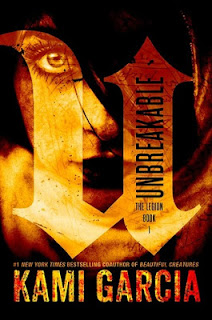 I never believed in ghosts. Until one tried to kill me.

When Kennedy Waters finds her mother dead, her world begins to unravel. She doesn’t know that paranormal forces in a much darker world are the ones pulling the strings. Not until identical twins Jared and Lukas Lockhart break into Kennedy’s room and destroy a dangerous spirit sent to kill her. The brothers reveal that her mother was part of an ancient secret society responsible for protecting the world from a vengeful demon — a society whose five members were all murdered on the same night.

Now Kennedy has to take her mother’s place in the Legion if she wants to uncover the truth and stay alive. Along with new Legion members Priest and Alara, the teens race to find the only weapon that might be able to destroy the demon — battling the deadly spirits he controls every step of the way.

Suspense, romance, and the paranormal meet in this chilling urban fantasy, the first book in a new series from Kami Garcia, bestselling coauthor of the Beautiful Creatures novels.(from GoodReads)

I'm not really the biggest fan of Beautiful Creatures but I'm willing to give this book a chance because I love the concept. It sounds like the tv show Supernatural with the demon hunting (haha I just saw that they mention this in the synopsis!). Unbreakable will be released October 1, 2013.

this sounds interesting!! i hadn't seen it yet!

I'm excited for this one, too. Secret societies, ghosts, twins! I never got into this author's other series, but I'll definitely be picking this one up. Great pick!
Natflix&Books' WoW

Just picked this up at BEA!

impressive book cover though, but not the book I was looking for. Thanks for your great post!

I was never much interested in Beautiful Creatures but I'd still love to give this author a try so maybe this will be the book to do so.