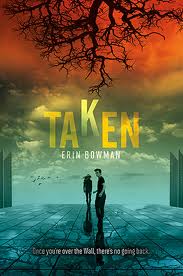 Summary:
There are no men in Claysoot. There are boys—but every one of them vanishes at midnight on his eighteenth birthday. The ground shakes, the wind howls, a blinding light descends…and he’s gone.

They call it the Heist.

Gray Weathersby’s eighteenth birthday is mere months away, and he’s prepared to meet his fate–until he finds a strange note from his mother and starts to question everything he’s been raised to accept: the Council leaders and their obvious secrets. The Heist itself. And what lies beyond the Wall that surrounds Claysoot–a structure that no one can cross and survive.

Climbing the Wall is suicide, but what comes after the Heist could be worse. Should he sit back and wait to be taken–or risk everything on the hope of the other side? (from GoodReads)

Review:
As soon as I started reading Taken, I was completely drawn in. I wanted to learn more about the Heists, especially because it was so mysterious. Where do the boys go? Why are they taken? However, as the story progressed, too many plot points were crammed in, making the book jumbled and not developed enough.

The beginning of Taken is so good, which makes it extra disappointing that the excitement dies down halfway through the novel. Gray is upset because his older brother Blaine is about to be Heisted and he's trying to deal with the feelings. Even though they don't share much page time, I could really see the brotherly relationship between the two. I was so surprised when we learn about the secret Blaine is keeping and thought that was a wonderful twist. I even enjoyed Gray's budding relationship with Emma in the beginning of the novel.

When Gray leaves Claysoot, that's when the writing suffers. He is brought into another dystopian society and it's pretty obvious who the bad guys are. So obvious that Gray figures it out pretty quickly and then is thrown into yet another dystopian society. This is what I mean when I say that the plot was crammed with too many events. I think the book would have been better if he had stayed in AmEast and that world was developed further.

The author also utilizes the device of deus ex machina, meaning that a random character saves the day and it's just totally unrealistic. Naturally there has to be a love triangle in this book, which took away even more of Taken's originality.

I didn't hate Taken and still want to see what happen next in the series. I just hope the next novel is a bit more developed than this one.

Sorry to read that the book didn't work out 100% for you, but it's also awesome that the story drew you in and that you'll still follow it through to the sequel. Perhaps you'll enjoy that more :).

I really liked the beginning of this book too and then rapidly lost passion for it-at least the writing was easy and that you'll return for the sequel (I'm still undecided-we'll see if the cover is as gorgeous as Taken's!)